Hey guys, how you guys been? Mehnnn, I've been so busy lately with a whole lot of chores and house improvements. Yeah, I finally relocated with my family 😁✌.

Thanks so much @hivenaija for this idea as this week's engagement topic. I must say, we really need to promote Nollywood movies in the littlest ways possible.

So my own very favorite Nigerian movie is The Wedding Party. It's an old movie, yeah I know but I still have another part of me glued to this masterpiece of a movie 😎. 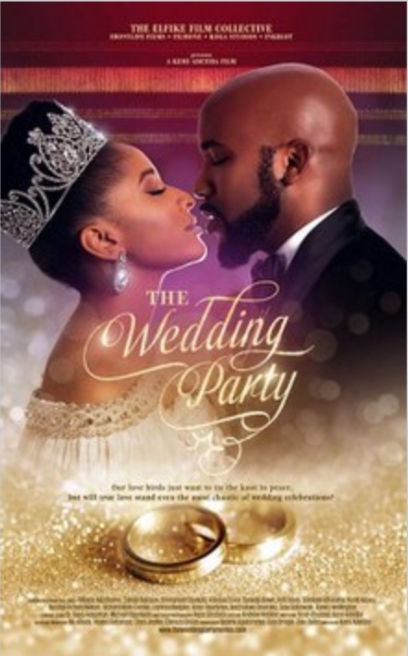 Dunni Coker, the daughter and only child of Mr and Mrs Coker, her mother's pride and joy of her fiancé, is a Yoruba lady set to get married to her fiancé, Dozie Owunka who is an Igbo guy and he is the second son of Mr and Mrs Owunka.The drama filled rom-com movie shows the very visible disagreement between the mothers of both families who believes one of them has a upper hand over the other. At the end after much tussling, both families finally unites embracing peace and love.

Omo forget, they really went all out to create this movie, no be chaise. Everything was just on point. The hall, the houses, the cars, the food and even those that represented; every part of the movie was just lit. No long cap.

My favorite scene in this movie was when the bride's family were making their entry into the party hall. Hilarious 😂. Award of "pepper them" gang goes to this people, walahi 😂.

I know we all have this one clumsy friend in our clique who tend to kinda mess things up when where supposed to appear clean. This dude who starred as Sola played a very good role here, seriously. I mean, who makes a video as rugged as one in a club during a bachelor's night and doesn't delete it immediately after watching? What do you really want to prove biko? 😂. Make God no let us see this kind of wahala during our own party, amen 😂🙏

Well, I like the whole concept of the movie, ranging from the ethnic aspect down to the part where everyone accepted one another to form a much stronger bond. A big shout out to the crew that made this one, kudos to you guys. I think the movie is perfect.

It's a definite watch for me ooo. Watch and watch again then come back and thank me lol. Also, the part two is out so do well to enjoy 😊.

@gangstalking -18
7 days ago
Whoever is directly controlling the V2K told me to kill myself.
They told me if I killed myself now it would save the lives of countless others.
Saying the longer I wait to kill myself the more people will suffer.
They are reckless and should have shown the proper media what they had before taking me hostage for 5 years. I know there are many in prison that dont deserve to be there because of this. Your stay in prison will not be fun @battleaxe and friends. People are going to want you dead when they find out what you did. I hope you die a slow painful death. You sick mother fuckers.

Hello, we have chosen this post to be curated by MCGI Cares(Hive) community. We are inviting you to join our community that study the words of God.

I don't remember the whole details of the movie but i remember laughing so hard and groaning too when watching it. They reay did a lot for that one

This is one Nigerian movie I can't forget easily. I can remember laughing heartily at the Cinema.

They honestly did a great job 😂