If you are a true cinephile Five Fingers is highly recommend. A forgotten classic that haven´t heard of it before. Nominated for 2 Oscars. 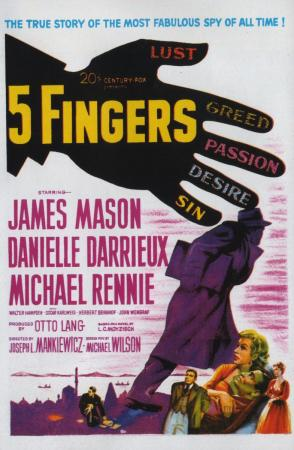 Turkey was officially neutral during World War II, but it actually served as a meeting point for spies from the warring powers, who were looking for an opportunity to exchange military secrets. A complex case of espionage, in which the Germans and the English were implicated, was about to change the course of the war, tipping the balance in favor of the Berlin-Rome-Tokyo Axis powers. Diello (James Mason), an ambitious character who was secretary to the English ambassador, hatched a risky plan to sell British secrets to the Nazis and then flee to South America.

Conclusion: Clever plot twist, James Mason is an amazing actor. He steals all the scenes of the movie