CineTv Contest: Movie That Made Me Fall Asleep

Hello friends. I have a thing for movies since childhood. When it comes to my favorite films, there are quite many of them. However, one film always manages to stay in the forefront, and I don't know why... Maybe because this is the first movie that made me fall asleep. It was so boring that even after multiple viewings, I just can't get enough of it. Yes, I am talking about the movie named "The Mummy" starring Brendan Fraser.

It all began when my parents took me to see this movie at the cinema. I remember sitting in a theater seat with popcorn in one hand and a large soda in another. I didn't pay much attention to the plot and was mostly intrigued by the special effects which seemed very cool back then.

I watched the movie from beginning to end without any problems, though when they started showing previews for other upcoming movies, I became sleepy and fell asleep several times throughout the entire movie. After the last preview, I stood up and went home. If only I had known how long I would be stuck with this film...

When I got home, I realized that I actually liked the movie and decided to watch it again. This time, I stayed awake until the end and was really impressed by everything that happened on screen. The special effects were amazing, especially the ones where Brendan Fraser was fighting against the evil mummy. He looked like an action hero, and his stunts were breathtaking. 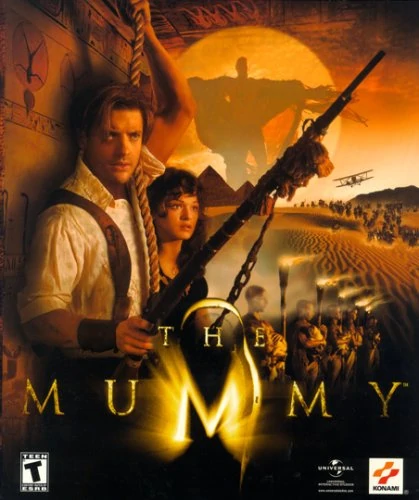 After watching the movie once more, I asked my mom if we could buy the DVD. She bought it for me and I've been watching it ever since. I think I saw it over 20 times already, and each time it gets better. I'm not sure what exactly makes it so fascinating, but no matter how many times I watch it, it never loses its charm.

The story itself is pretty simple. A high priest named Imhotep has been cursed and turned into a mummy. He escapes from the tomb and starts killing everyone who tries to stop him. So, basically, it's like an Indiana Jones meets the Mummy movie, except that the Mummy actually looks scary.

I guess that I like this movie so much because it's one of those rare films that doesn't follow the typical Hollywood formula. Instead of showing a lot of explosions, the main hero is trying to save the world from a mummy. And he does it, in the most believable way possible. It also helps that Brendan Fraser is such a charismatic actor. He manages to make the audience believe that he's this hero who will help us defeat the evil mummy.

He goes through a lot of obstacles during the film, and every time something happens, you can feel the tension rising. At the same time, it's important to mention that the special effects look realistic and almost lifelike, which is always a big plus. I just love the way he fights with the mummy and how the ancient Egyptian city looks. If I had to describe it in one word, it would be majestic.

All in all, I guess that the reason why I keep rewatching this movie is because it has something special, and I can never put my finger on it. Perhaps it's the fact that the main character doesn't look heroic at all, but rather pathetic. There are scenes where he's running away from the mummy, and the whole process seems so real that you start feeling sorry for him.

At the end of the day, I guess that it boils down to the fact that this is a truly unique film and unlike anything else I've seen. I hope that you'll enjoy it as much as I do if you decide to watch it.

This is my entry for the CineTV Contest. My goal wasn't to win, but to write something interesting. I hope that you enjoyed reading it.

Amiga @lett how nice that you liked the mummy. When we like a movie and watch it several times we notice different things and that's why we like it more. I share with you your vision of the protagonist as we saw him very funny in the Tarzan movie, which in the mummy is not not not funny either. But I think it was enough with only one movie. A pleasure to read you 🤗.

Dear amiga, thank you for your comment. You are right, this kind of movies can be watched many times because there are always something new to see. And if one likes them then he will make fun of them by himself or with some people.

So it was boring in the beginning and after that you enjoyed it? lol interesting application for the contest
!1UP