A Clockwork Orange is a 1971 film. It was directed and adapted to film by Stanley Kubrick and is based on the novel of the same name by Anthony Burgess, published in 1962. 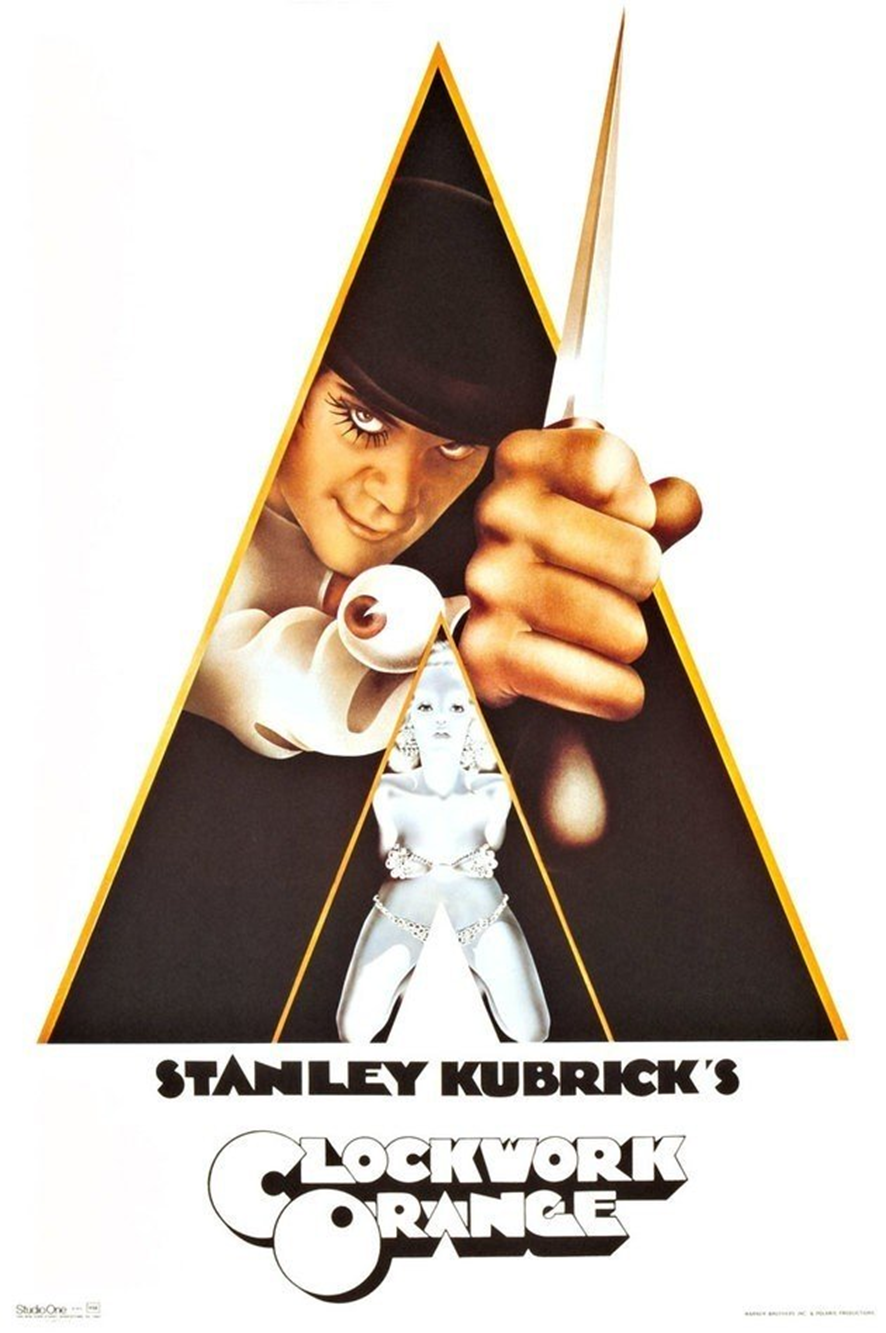 The story is set in the United Kingdom in a dystopian future marked by violence and authoritarianism. Alexander Delarge, the protagonist, leads a gang of marginalized youths who spread chaos through unjustified acts of violence.
A Clockwork Orange tells the story of the crimes of a gang of British youths led by Alex. Alex, after being tried and sentenced to prison for his actions, agrees to undergo a psychiatric treatment called Ludovico in order to reduce the time of the sentence, a treatment that is still in an experimental phase. Then, everything takes an unexpected turn.
Exploring timeless social and political issues, A Clockwork Orange reflects on themes such as juvenile delinquency, psychiatry, free will and the moral corruption of the authorities. Disturbing and replete with raw images of violence, it has become a cult film acclaimed by audiences and critics alike and has established itself as one of Kubrick's iconic works.

Trailer of the film

Summary of the film

Beginning of the story 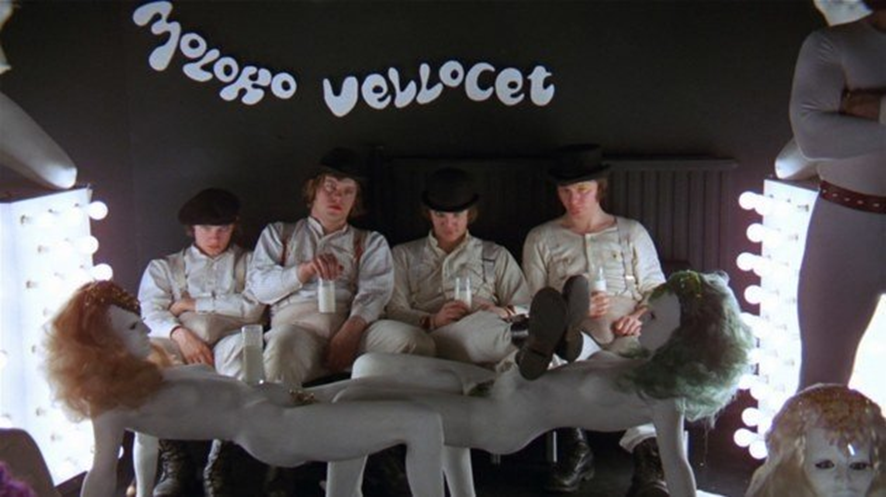 The film begins with Alex, Dim, Pete and Georgie sitting at a table in their favorite bar. With their clothes covered in blood, they drink "milk with" (with drugs mixed in) as they decide what they are going to do that night. From the start, their ennui, their lack of life purpose and common sense is evident.
What unites them is the desire for violence and mayhem: they are a gang, which is clearly evidenced by the uniform-like outfits they wear.

Attack on the beggar

As soon as they leave the bar, they find an old drunkard singing, lying on the floor. The companions surround him and begin to threaten him.
Ready for aggression, the beggar shows indifference in the face of his own death, sketching with his words the portrait of a dystopian reality in which they find themselves: "I don't want to live, not in a dirty world like this".

The gang continues on their way to an abandoned movie theater where a gang rape is taking place. The cruelty of the act contrasts with the soundtrack. It is a cheerful music that suggests a circus or romeria atmosphere. Through this, the idea of violence as a spectacle or playful act is symbolized.
Alex and the companions interrupt the scene, not to save the victim, but to surprise the attackers. Billyboy and his companions are a rival gang. The existence of another gang underscores the weight of juvenile delinquency in this dystopian England. 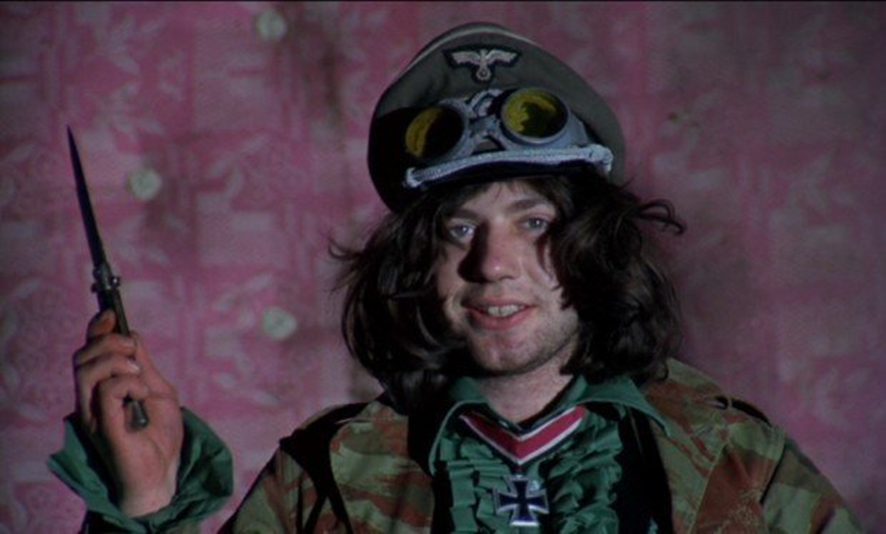 The protagonists win the battle and run away euphoric. They steal a car and Alex drives crazily, risking his own life to feel the adrenaline, the only way to feel pleasure. They intentionally cause accidents as if it were a game, looking for laughs and ultra-violent attacks.
Attack on Frank and his wife
That same night, the gang knocks on the door of a writer and his wife. Alex says he's had an accident and needs to use the phone to call for help. The couple lets them in and then the gang invades the house, covering their faces with fake noses and masks reminiscent of carnival, merriment and fun.
While laughing and singing the song "Singing in the rain", Alex beats the man and the gang rapes the woman to death. The scene shows that, in that sadistic world, any gesture of empathy is transformed into vulnerability. 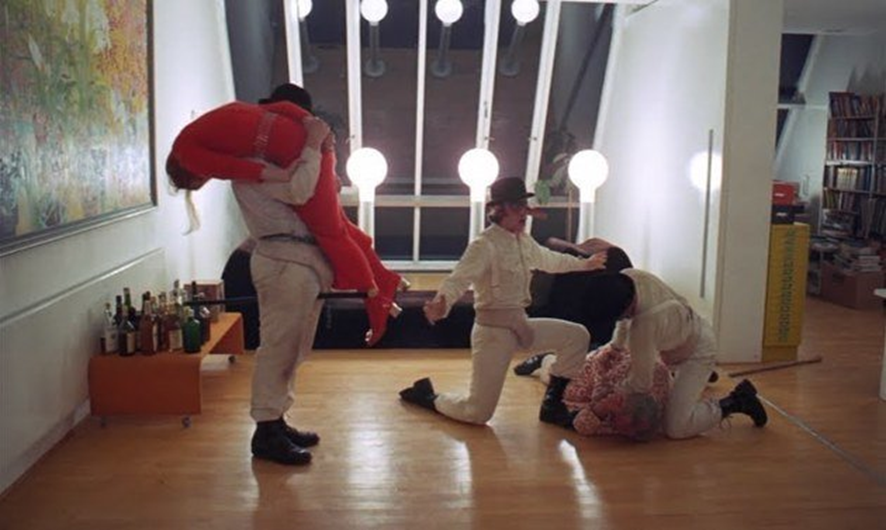 The life of Alexander Delarge

After committing the crimes, the bandits return home. The building where Alex lives is deserted, with debris on the floor, showing an almost apocalyptic scene. The place seems suddenly abandoned, as if it was no longer inhabited.
The protagonist lies in bed and listens to Beethoven's Ninth Symphony, his favorite piece of music, while remembering and imagining scenes of violence and death. In the morning, the viewer discovers that the criminal lived with his parents and was enrolled in school. Alex does not attend classes and sleeps in. In the meantime, his parents talk and wonder what is keeping him out so late. However, they are both disconnected, tired, without time or willingness to monitor their son's behavior.
They receive a visit from the school counselor, who suspects that Alex and his gang are the perpetrators of the crime against the writer. He lets them know that the young man will be tried as an adult and runs the risk of going to jail. Observing their own life, the parents wonder where this resentment is coming from, without finding an explanation: "You have a good home, good parents who love you? Is it perhaps some demon inside you?" 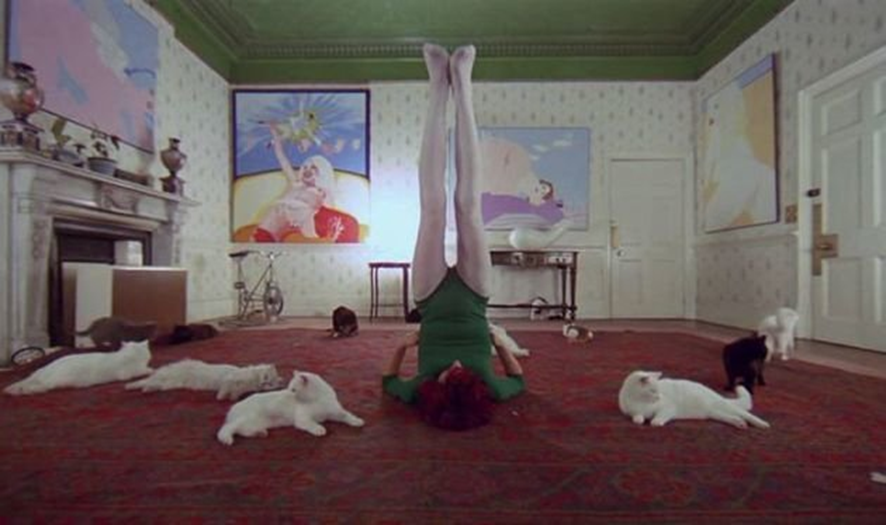 The job seems simple: the house is full of works of art and other valuable objects, and is guarded only by a woman who lives with her cats. When the doorbell rings, Alex uses the same excuse as with the writer: he claims to have had an accident and needs a phone to call for help. The woman recognizes him and immediately calls the police.
Masked, the protagonist invades the house and fights with the woman, whom he kills with a penis-shaped statue. This object acquires a symbolic character as it refers to the sexual aggressions that run through the narrative.
His companions wait for him at the door, but break a bottle in his face and leave him temporarily blind. Lying on the ground, unable to escape the police, he is imprisoned. His despair at his own pain contrasts with the pleasure he takes in the pain of others: for the first time, some humanity and fragility can be seen in him. 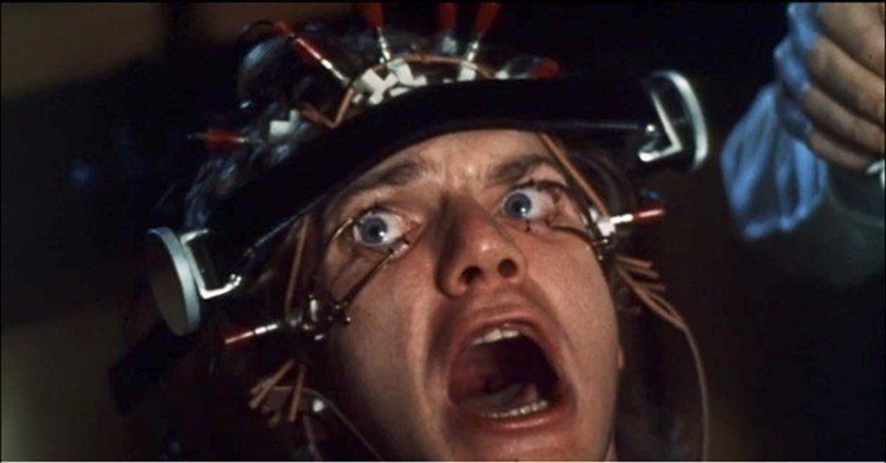 After being injected with a drug, Alex is immobilized with a straitjacket. He also wears a motorcycle helmet and eye clips to force his eyes open. As he is subjected to images of extreme violence, he begins to feel sick and starts to feel the effects of adversarial therapy. "It's funny how the colors of the real world only seem real when we see them on a screen," he says.
After listening to the protagonist's inner monologue, we hear the scientists' explanation: the drug causes paralysis and terror, leaving the patient more vulnerable to conditioning suggestions. Thus, the Ludovico method fights cruelty through more cruelty.
This becomes more evident when the nurse declares, in the face of the patient's suffering: "Violence is a terrible thing. That is what you are learning now. Your body is learning."
Alex's body is forced to react negatively to any scenario involving aggression or sex. By chance, the Ninth Symphony plays in one of the videos, which makes the young man scream that "it's a sin". The scientist comforts him by telling him that he will be released.
In the next scene, the former delinquent is exhibited in a box with the minister, who intends to demonstrate that the Ludovico method was created to protect good citizens. To achieve this, he shows Alex's passivity in the face of insults, humiliations and aggressions. In addition, a half-naked woman is presented to Alex, who, upon touching her breasts, begins to feel bad again. The audience applauds with pleasure.
The priest reacts against this degrading spectacle, stressing that it is not a true recovery and that there is no sincerity in Alex's actions, as he had foreseen: "He ceased to be a criminal but he also ceased to be a creature capable of making moral choices".
The minister affirms that the State is not concerned with questions of ethics, but with the decrease of crime and concludes by affirming that the young man, now docile, is ready to be crucified and not to crucify.

The protagonist wakes up in the hospital with some wounds on his body. His mind, however, seems to have returned to what it was before the Ludovico method. Thus, he recovers his way of speaking, his arrogance and his violent imagination. His face appears once again in the press, but this time it is described as a victim of the treatment. A banner reads: "Murderous government".
The minister visits Alex and apologizes, but his intentions are obvious: he wants to erase his bad image and silence the opposition who, according to him, are making political use of the case. He gives him food in his mouth while promising him a large sum of money and a good job if he stands by him in front of the media.
So, the young man accepts the bribe, the doors to the room open and suddenly bouquets of flowers, journalists and cameras start pouring in. Within seconds, the farce is constructed and they create a spectacle to fool the people. The minister and the criminal are now photographed together.
Alex is back and a star. His conditioning has been reversed and his instincts are still alive, which becomes noticeable in the final scene, when he imagines having sex with a woman in the snow and a crowd applauding the scene.

@gangstalking -18
7 days ago
Whoever is directly controlling the V2K told me to kill myself.
They told me if I killed myself now it would save the lives of countless others.
Saying the longer I wait to kill myself the more people will suffer.
They are reckless and should have shown the proper media what they had before taking me hostage for 5 years. I know there are many in prison that dont deserve to be there because of this. Your stay in prison will not be fun @battleaxe and friends. People are going to want you dead when they find out what you did. I hope you die a slow painful death. You sick mother fuckers.

Thanks for your review. This is a very dystopic and mind bending film.

Thank you for sharing. :)

Always liked Clockwork Orange, lots of funny bits, be it intentional or not. Alex goes from being repulsive to sympathetic, he's truly a beast, but the beast system is far worse, and they get what they deserve in the end by making a deal with this new devil (Alex)

Direct translation without giving credit to the original author is Plagiarism. Repeated plagiarism is considered fraud. Fraud is discouraged by the community and may result in the account being Blacklisted.
Guide: Why and How People Abuse and Plagiarise

Please note that direct translations including attribution or source with no original content are considered spam.